A number of states have already rolled out online lottery platforms as they look for ways to make their products as entertaining and accessible as possible, while other states are looking to follow in their footsteps and introduce their own. But just where is it possible to buy lottery tickets over the internet in the USA and which other states might be offering online lotteries soon?

Where Can You Play Online?

You can currently play the lottery online in ten U.S. states. They are:

In addition, the states below offer lottery subscriptions, where you can buy lottery tickets for multiple weeks at a time:

These differ from full online lottery services as you cannot buy individual tickets. Instead, you have to commit to play for a minimum number of weeks or spend a certain amount of money on tickets.

Online lotteries and subscription services are only available to people located in each of the states listed above. They all require you to create an account and provide some personal details before you can buy tickets or subscriptions.

Now you can play Texas lottery games online via a lottery messenger service if you live in the Lone Star State or outside of the USA (but not in other US States).

Whilst in Oregon, you can play via messenger service within the state, but not from other states nor outside the USA.

Visit the lottery tickets page to view all the games that you can currently play online from your current location via messenger services - more are being added all the time!

How Online Lotteries Began In the U.S.

The door was only opened for the possibility of online lotteries in December 2011, when the U.S. Justice Department reversed a ban on many forms of internet gambling. While the ruling continued to outlaw sports wagers, it did allow states to start exploring and discussing legislation for online lotteries.

Illinois became the first state to offer online ticket sales when it set up a pilot program in March 2012 to sell Lotto and Mega Millions tickets, a scheme that was later given a wider rollout. Georgia followed suit in November 2012, while Michigan’s online lottery went live in the fall of 2014.

Kentucky introduced lottery ticket sales over the internet in April 2016. Lawmakers had granted their approval in 2013, but it took three years for the state to develop a robust ticketing system. Pennsylvania brought out its first batch of online lottery products in May 2018, with Mega Millions and Powerball following in January 2020.

New Hampshire became the sixth state to get in on the act, despite concerns from retailers that an online lottery would lead to reduced sales in local stores. The state’s iLottery platform was launched in September 2018, offering various instant win games and the opportunity to purchase Mega Millions and Powerball tickets online.

What about the Future?

It can take a number of years to introduce online lotteries, as states have to pass detailed legislation before they can even decide on which games to offer. Once this is done, they need to develop a secure and scalable ticketing system, something that the Kentucky Lottery found can take a long time. The Minnesota Lottery launched online products in the first quarter of 2014, but lawmakers later insisted they had not been given explicit approval and the games were pulled in May 2015.

There are still a few jurisdictions which do not offer a lottery at all. Players in Alabama, Utah, Hawaii, Nevada, and Alaska all currently have to travel to other states to buy tickets, while Mississippi is set to get a lottery for the first time within the next year after lawmakers approved a bill for one in August 2018. An online lottery platform may follow in the state, but further legislation will need to be passed before this can happen.

New Jersey, Massachusetts, Connecticut and Hawaii all had online lottery bills proposed in 2017, but all of them were rejected. Hawaii has some of the strictest gambling laws in the country so it is unlikely that a lottery – online or otherwise – will be available to play there any time soon.

Massachusetts may soon offer an online lottery after neighboring New Hampshire launched its own. Officials hope that an online platform would “modernize” the lottery and defend against competition from the state’s expanding casino industry. Executives at the Connecticut State Lottery hold a similar position and have said that they want to “modernize distribution channels through the internet.”

New Jersey is the closest of all these states to having its own online lottery, after it became the first to legalize online lottery couriers in 2017. These are services which buy lottery tickets on behalf of their customers, who enter their orders via the courier’s website. The experience is very similar to buying tickets directly from an online provider. While further legislation is needed before an official online lottery can be introduced, New Jersey’s acceptance of third-party couriers means that this may not take long.

Online Lotteries at a Glance

Take a look at the map below to see which US states have passed online lottery bills, as well as those states in which bills have previously been introduced but not passed. 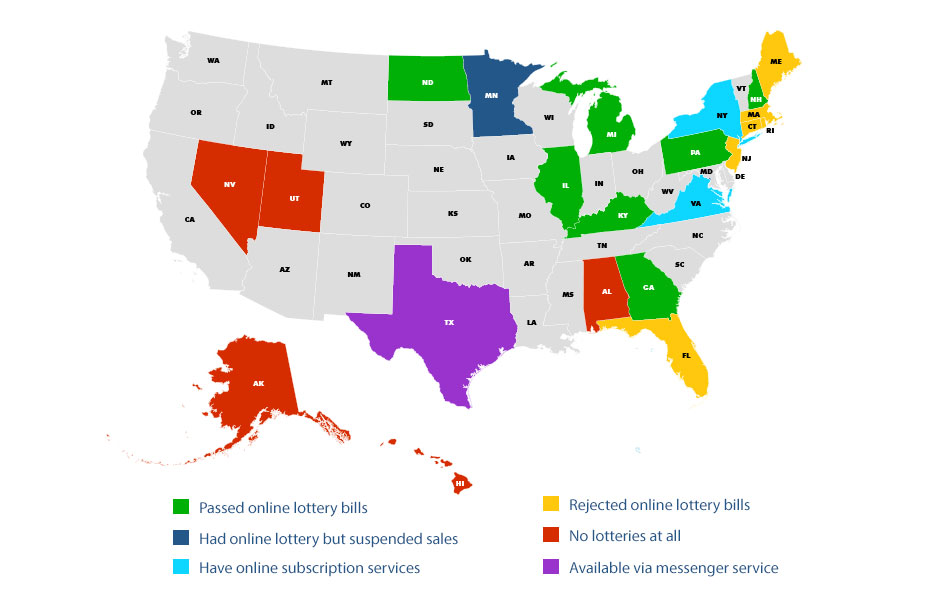